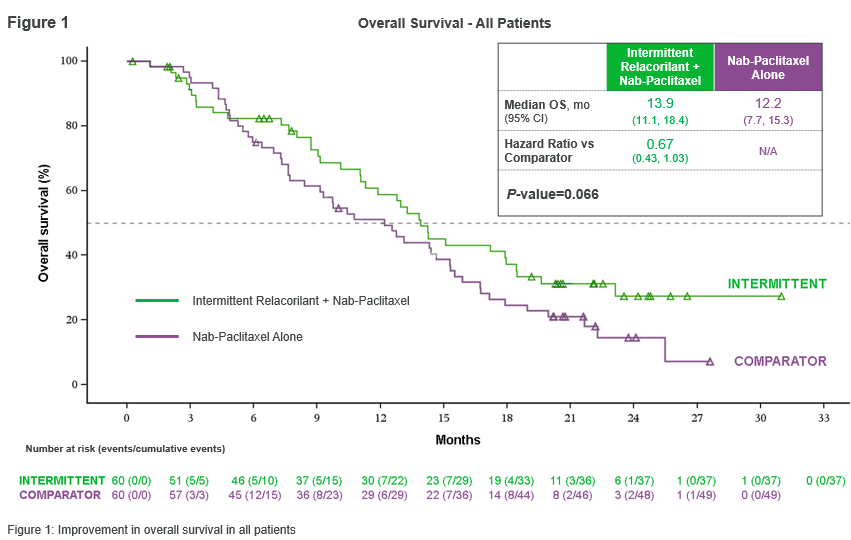 The women who enrolled in this trial were very sick and had experienced disease progression following prior therapy (median number of prior therapies: three). By chance, more women with either primary platinum-refractory disease or who had already received four or more prior lines of therapy, both indicators of a very poor prognosis, were assigned to the intermittent arm. As is typical of late-stage clinical trials, such women will not be enrolled in Corcept’s upcoming Phase 3 trial. 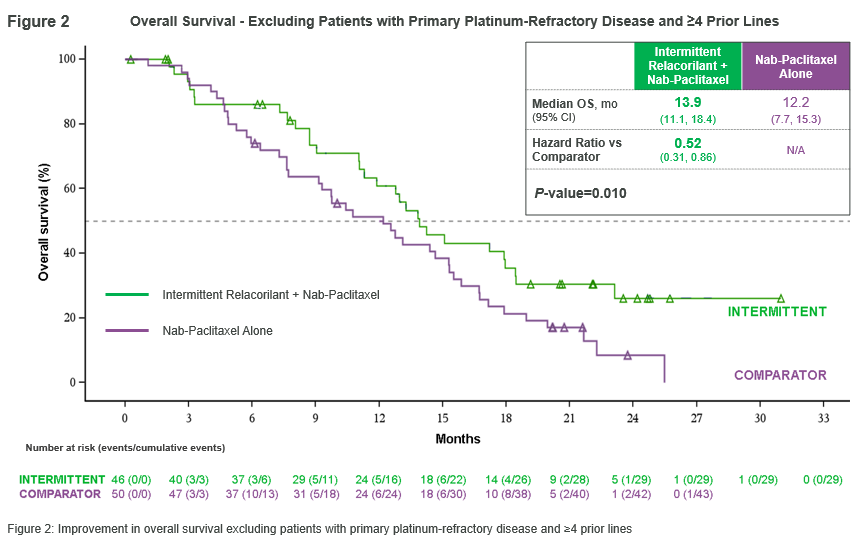 “Corcept has introduced a novel oncologic therapeutic platform, cortisol modulation. These results constitute a potentially important medical advance,” said , MD, Deputy Director at the , member of the Board of and Associate Director of . “In this large, randomized study, women with recurrent, platinum-resistant ovarian cancer who were administered relacorilant at the time they received nab-paclitaxel exhibited meaningful improvements in progression free survival, duration of response and overall survival – without increased side effects – compared to women who received nab-paclitaxel alone. For this patient population, relacorilant plus nab-paclitaxel has the potential to become a new standard of care.”

“We are excited to receive these survival data, which have continued to improve as the trial has progressed,” said , PharmD, Corcept’s Chief Development Officer. “If our Phase 3 trial replicates the results in progression free survival, duration of response and overall survival that we’ve seen in Phase 2, it will be an unprecedented success for patients with ovarian cancer. No approved therapy has been shown to significantly extend survival compared to standard chemotherapy in women with platinum-resistant ovarian cancer. We plan to meet with the FDA as soon as possible to define the best path forward and to open our Phase 3 trial in the second quarter of 2022.”

On , Corcept will host an event for investors and analysts regarding its ovarian cancer program. Click here to register. In addition, the company plans to present these results at a major oncology conference in 2022.

Ovarian cancer is the fifth most common cause of cancer death in women.1 Patients whose disease returns less than six months after receiving platinum-containing therapy are described as having “platinum-resistant” disease. In , approximately 20,000 women with platinum-resistant disease are candidates to start a new therapy each year.2 There are few treatment options and median overall survival following recurrence of disease is 12 months or less with single-agent chemotherapy.3 No approved therapy has been shown to significantly extend overall survival in patients with recurrent, platinum-resistant ovarian cancer compared to standard chemotherapy.4

The data in this release come from Corcept’s 178-patient, randomized, controlled, Phase 2 trial of relacorilant plus nab-paclitaxel in patients with recurrent, platinum-resistant ovarian cancer.5 The women who entered the trial had experienced disease progression on prior lines of therapy. The median number of prior treatments was three.

OS was assessed after a pre-determined number of patient deaths had occurred. At the time of database cutoff, 128 of the 178 women who enrolled in the study had died. Fourteen additional women in the intermittent arm and nine additional women in the comparator arm are expected to contribute to the final overall survival results. One woman in the intermittent arm and one in the continuous arm have yet to experience tumor progression – for both patients it has been over twenty months since they initiated therapy with relacorilant.

There is substantial evidence that cortisol activity at the glucocorticoid receptor (“GR”) allows certain solid tumors to resist treatment and that modulating cortisol’s activity may help anti-cancer treatments achieve their intended effect.

Many types of solid tumors express the GR and are potential targets for cortisol modulation therapy. In some cancers, cortisol inhibits cellular apoptosis – the tumor-killing effect many treatments are meant to stimulate. In other cancers, cortisol activity promotes tumor growth. Cortisol also suppresses the body’s immune response; activating – not suppressing – the immune system is beneficial in fighting certain cancers.

Corcept is conducting clinical trials of its proprietary selective cortisol modulators in combination with three different anti-cancer treatments in patients with ovarian, adrenal and prostate cancers. Corcept’s first controlled study in oncology – relacorilant plus nab-paclitaxel for the treatment of patients with ovarian cancer – has demonstrated statistically significant and clinically meaningful results.

Relacorilant is a non-steroidal, selective glucocorticoid receptor modulator that does not bind to the body's other hormone receptors. Corcept is studying relacorilant in a variety of serious disorders, including ovarian and adrenal cancer and Cushing’s syndrome. Relacorilant is proprietary to Corcept and is protected by composition of matter and method of use patents, as well as orphan drug designation in for the treatment of pancreatic cancer and both and the for the treatment of Cushing’s syndrome.

Corcept has discovered a large portfolio of proprietary compounds that selectively modulate the effects of cortisol and owns extensive and foreign intellectual property covering both their composition and their use to treat a variety of serious disorders. The company is conducting clinical trials of its leading cortisol modulators as potential treatments for patients with Cushing’s syndrome, ovarian, adrenal and prostate cancer, weight gain caused by the use of antipsychotic medications and liver disease. Corcept’s drug Korlym® was the first medication approved by the for the treatment of patients with Cushing’s syndrome.

Statements in this press release, other than statements of historical fact, are forward-looking statements based on our current plans and expectations that are subject to risks and uncertainties that might cause our actual results to differ materially from those such statements express or imply. These risks and uncertainties include, but are not limited to, our ability to operate our business, conduct our clinical trials and achieve our other goals during the COVID-19 pandemic; risks related to the development of relacorilant and other product candidates, including their clinical attributes, regulatory approvals, mandates, oversight and other requirements; and the scope and protective power of our intellectual property. These and other risks are set forth in our filings, which are available at our website and the SEC’s website.

In this press release, forward-looking statements include those concerning the development of relacorilant as a treatment for ovarian cancer, including its clinical attributes, regulatory approvals, mandates and oversight, and other requirements; the potential for relacorilant plus nab-paclitaxel to become a standard of care for patients with recurrent platinum-resistant ovarian cancer; our planned meetings with the (FDA); our planned Phase 3 trial, including its design and start date; and the scope and protective power of our intellectual property. We disclaim any intention or duty to update forward-looking statements made in this press release.

Graphics accompanying this announcement is available at
https://www.globenewswire.com/NewsRoom/AttachmentNg/0c6c3a39-1cd5-4ace-83fe-82f15ff7d3a7 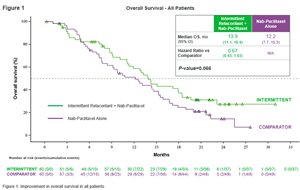 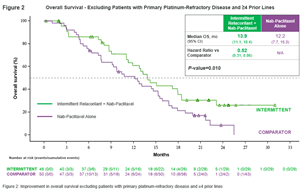